Students and academics on the field camp workshopped sexual harassment and other barriers to women in archaeology and allied sciences.

First, it featured an all-women group of academics, postgraduates and senior undergraduate students from the departments of Archaeology and Geological Sciences. Second, encompassing Women’s Day on 9 August, it presented a rare opportunity to workshop issues that affect women in the discipline. These include barriers to their careers in a male-dominated field – and the pervasive incidence of sexual harassment in the field.

Held in the West Coast National Park and West Coast Fossil Park, the programme aimed to upskill participants and provide a safe space to bond and discuss their career challenges. As Pickering said in a recent article, HERI is working to change the status quo with a new generation of female scientists.

“We have an incredible record of human evolution in South Africa, but the entire narrative of palaeoanthropology has been dominated by white men, many of whom are not even South African. We want to disrupt this narrative by supporting South African researchers from all backgrounds and telling our origin story with a diverse and inclusive team.”

On the Saturday Ackermann ran a three-and-a-half-hour workshop on sexual harassment, asking the group to define harassment, give examples, develop and work through scenarios around harassment (“It’s important to practice what to do”), and evaluate and contribute to new codes of conduct currently being developed for the Faculty of Science, where she was recently appointed Deputy Dean for Transformation.

She is keenly aware of the difficult territory women tread in pursuing their chosen disciplines. In her recent inaugural lecture Ackermann honed in on several alienating issues: gender and race power relations, the patriarchal and colonial history of the discipline, and its influence on scientific narrative and research.

The all-women group on field camp in the West Coast Fossil Park.

Ackermann has also brought other perspectives: as chair of the Committee on Diversity for the American Association of Physical Anthropologists, she’s been involved in discussions and policy development around sexism, racism and transformation of the discipline more generally.

“My goal is to grow materials like the scenarios in order to have them for the science faculty more broadly, as a resource for everyone, men included,” she said. “The reality is that materials like this are primarily made in, and cater to, North Americans, and there are many legal, cultural, language and other contextual issues that make them inappropriate for our context.

“Environments that are hostile to women – such as field environments where there is a lot of harassment – create reduced satisfaction with, and commitment to, fieldwork and the science itself.”

“An environment that is hostile to women in science is also likely to be hostile for other under-represented groups.”

She added that an environment that is hostile to women in science is also likely to be hostile for other under-represented groups, such as people of colour, queer or differently abled people.

“And intersectionality makes this even more acute.”

Between these discussions, the group also engaged in activities such as flintknapping (shaping high-silica stones with special tools to produce sharp projectile points or tools), a geological survey and ostrich-eggshell bead-making, a painstaking and ancient art practised by women of the Khoe and San groups. 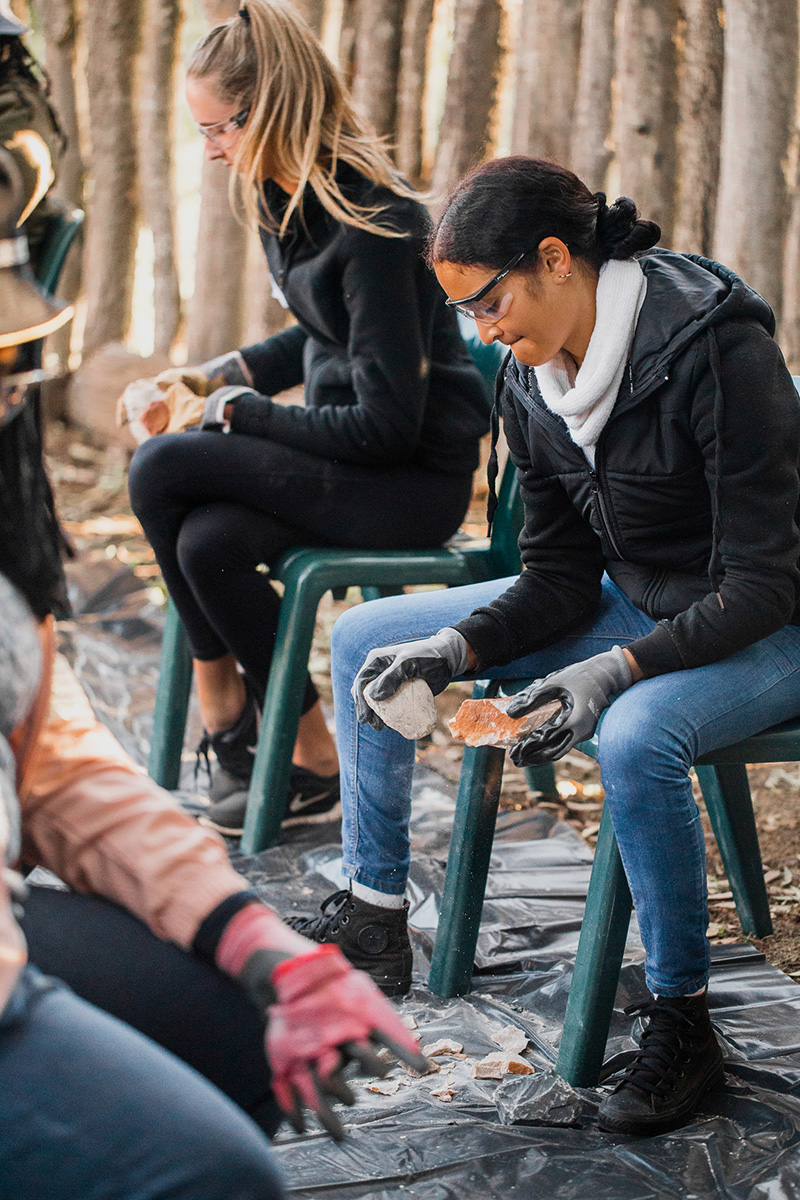 “This was nice, and really inclusive,” she said, adding that she’d been inspired to continue to postgraduate studies.

“I really enjoy the community and diversity that academia can give you.”

“I really enjoy the community and diversity that academia can give you … We didn’t need to tell each other what to do; we worked as a team and just got things done. I think part of that was because we were all women working together.

“The geology activity was especially fun because I’ve never done any work in geology before. Now I’m looking at where I can incorporate it into my academic life.”

“I didn’t know we had a policy for sexual harassment at UCT, so it was nice to be informed. It was good to hear stories from women who’ve experienced harassment. It made me more aware of what happens, not just in the field, but everywhere.

“I’ve never experienced it, so I didn’t think it was a thing – but now I know it’s a huge thing. I feel more prepared now for how to handle harassment if it were to happen to me. The techniques mentioned in the workshop were very useful for understanding how to deal with the person and how to follow procedure.”